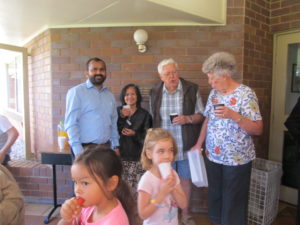 It was a glorious sunny Autumn morning – truly worthy of the International Family Groups Day.
Here at Sacred Heart, Booval, Qld., we celebrated with Mass, followed by morning tea for all.

How fitting it was that today’s Gospel and Homily were centred on “Love One Another.” 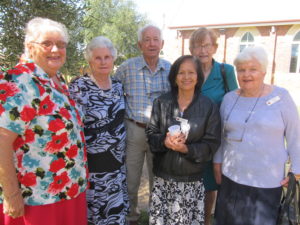 Those who have been there from Day One in 1990 – from left: Bonnie, who with late husband Kevin were our first Co-ordinators, Leila, Cliff, Lillian, Eileen, Desolie

Twenty-eight years ago, two young Passionist Priests, the Traynor brothers, came to run a mission in our parish. Definitely not the traditional Fire and Brimstone variety of the past. At each session, Father Brian and Father Paul role-played, sometimes in costume, aspects of God’s command to Love One Another. This was the first we’d heard of Father Peter McGrath and the vision he had, Family Groups, which has since spread world-wide. He saw the need for it in his parish, where the parishioners would smile at each other during the Sign of Peace, and that was their only contact with each other. He wanted to change that. 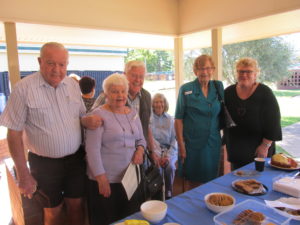 This mission was the beginning of wonderful happenings in our parish. Under the guidance of the first Queensland Directors, Gwen and Russ Winterscheidt, groups were formed and Bonnie and Kevin Mulroney were our first Co-ordinators. How wonderful to have Bonnie as one of today’s celebrators. There were a number of us here today who have been in Family Groups ever since the start. 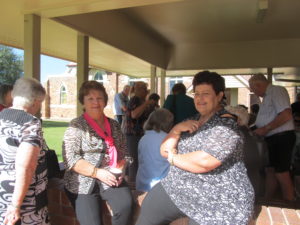 We have created so many great memories together, not only our monthly gatherings, which have sometimes been adventurous, sometimes relaxed, sometimes week-ends away, but have attended memorable conferences, such as that incredible event at Meroo in April 2001, and at Valla Park in northern N.S.W. where all the parishes took their own special F.G. Banners, and we were initiated into the Family Group Hug. At another conference, we took on the role of the Corinthians, and loving one another – taking appropriate food (dates etc.) to visit the various groups. 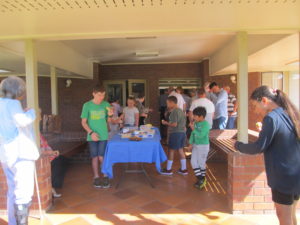 Kids getting in there first

I give thanks today for Fr. Peter, Gwen and Russ, and everyone who got this wonderful movement going. So many lasting friendships formed, where we all care for each other between meetings, as well as enjoying each others company socially, regularly.