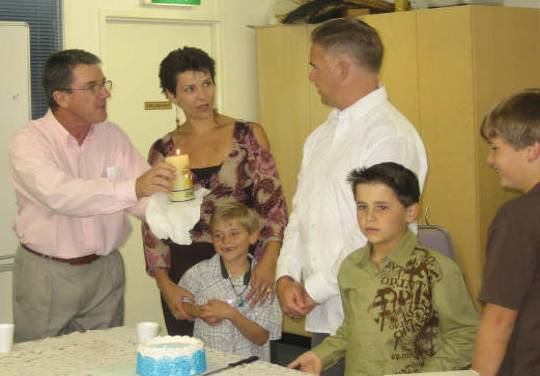 On Sunday 18th May, 2003, Brad Hunt was busily cleaning up at the end of a lovely family BBQ which he had cooked for his father in law’s birthday. As some of the family prepared to leave, Brad sneaked into the garage to grab his new prized possession, a skateboard which his wife, Wendy had given him just a week earlier for his 37th birthday. Wendy had given him his own skateboard as he was always on his boys’ skateboards, so having one of his own seemed a good idea. Brad went to out the front of the Blue Mountains home he proudly owned with Wendy. Being a quiet cul-de-sac it was a case of having the whole space to himself. A steep sloping access road provided the perfect runway for the showing off his skateboard skills to his guests as they left. As the sun began to set, Brad’s brother in laws watched in awe as Brad sped down the hill several times.

Disaster struck this innocent suburban Sunday scene when Brad fell awkwardly at pace from his skateboard and smashed the back of his head on the road’s surface. The time after this is a blur for Wendy and the boys but Brad was rushed to hospital with massive head injuries that were immediately diagnosed as life threatening. Over the next few days family members and friends slowly came to grips with the likelihood of Brad’s death. He was given no chance of survival and at best would be ‘a vegetable’. On the Thursday night life support machines were switched off and the family were given their chance to say ‘goodbye’ to the almost unrecognisable Brad but he began to breathe on his own. Despite every expert opinion saying there was no other outcome, Brad did not die but slowly and with almost imperceptible progress, he started to recover. A miracle had occurred. Doctors were delighted to be able to say they were mystified by the vital signs they were seeing.

Another amazing event occurred three or four days later when Brad’s sister and his cousin were by his bedside. Brad with arms up out in front of him suddenly sat up in bed with a peace-filled but intent look on his face. He lay back down in his hospital bed to the astonishment of those around him. Fiona said to Wendy to make a note of this date and to ask brad about this near-death experience. Months later when Brad was able to speak to his family he related that he had vision of his nanna and his godmother both of whom had passed away. He also explained that he told God that he cannot leave his family as his boys were too old to grow up without a Dad.  Over the next weeks and months, Brad’s Family Group from St Thomas Aquinas Parish, Springwood, was one of the sources of support for Wendy and the boys. Known as the Windon Group, they had kept up their prayerful support and backed it up with meal rosters, hospital visits, and even a pet rabbit for the boys to play with! This practical presence at the family home continued even after Brad’s slow recovery began. Family Group outings continued for Wendy and the boys when they could manage them, food parcels arrived at the home, the boys were taken to Scouts and footy training and so on. Some helped with Brad’s physical rehabilitation. After Brad came home for short visits, followed by weekend leave, he eventually returned to the Mountains with all his injuries and inabilities slowly being challenged by his determination to recover.

If that wasn’t enough, around this time Wendy was diagnosed with Breast Cancer and required emergency surgery Again the Family Group support ‘clicked in’ especially after another member developed throat cancer. A healing Mass was held and all three are doing well!! With the fantastic and tireless help of Wendy, and the support of the Western Areas Health Service rehabilitation service Brad tries to lead a fairly normal existence. He is ‘legally blind’ but some sight; he has difficulties with balance and other motor skills and suffers occasional seizures. But his wit is sharp, his spirit is soaring, and his wisdom is considerable.

Late last year Brad expressed a desire in his Family Group to become a Catholic. The day that he came to the Church for the first time after the accident, carefully supported by Wendy and the boys, he spoke with difficulty through slurred speech some heartfelt words of thanks to all the parishioners who had been praying for the miracle that in fact occurred! There certainly weren’t many dry eyes in the church that day!

Given all that background, it was a great occasion on Easter Saturday night this year when Brad took his place in the Parish Community and received the Eucharist for the first time after his Confirmation earlier in the Mass. Nearly all the Family Group was there and a suitable celebration was held.

Brad’s journey of learning more about the Church was an activity of the Family Group with one of the group being his official sponsor. Brad openly says that his desire to be a full “card-carrying member of the Catholic Church” came from his experience of the Family Group and his wish to be ‘authentic for his boys in his desire for them to receive the Eucharist. Brad and Wendy have enriched our Family Group with the precious great gift of their lives. That is the true value of Family Groups as people learn to open their hearts and homes to each other. All of us do that in Family Groups but thankfully not in such a dramatic fashion as our Brad!

His reflection on his accident and all it has meant to his family, neighbours and friends is summed up in the ideas that life is a precious gift which has as its focus how we journey not our destination.